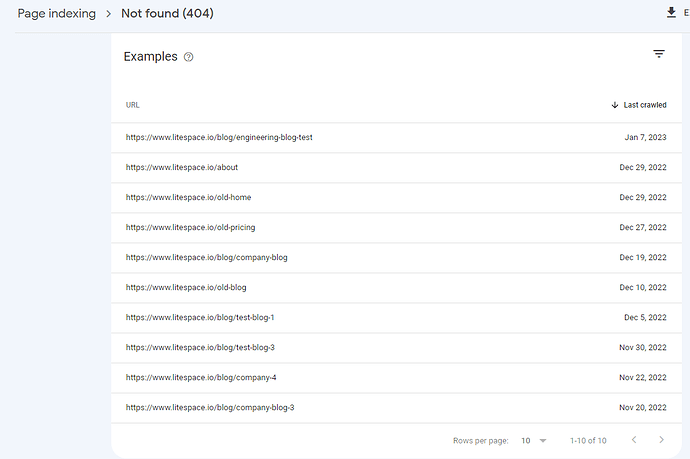 These are old pages that we’ve created under webflow but should no longer be within our webflow, not sure why google still says they are 404 and how can we fix them?

Hi @jacklau, you can check whether the sitemap that’s on your site settings is uploaded manually and is updated accordingly.

Aside from that, those seem to be crawled quite awhile ago, so they may already be gone in the latest crawl.

those should be removed, but then it just keeps saying that this problem exists. It is not part of our sitemap. Do you have any recommendation way to solve this?

In Google Search Console have Google re-index your sitemap. GSC also has a remove URL tool.

Google holds on to these for awhile because it can’t tell if they’re gone permanently.
Ideally, a 410 gone would be a clearer indication, but I’ve not seen many web platforms implement that HTTP response code.

is there a way to accelerate it?

@jacklau - Stale data in your search console is just that, stale. It does not hurt anything and if you resolved the core issue then don’t concern yourself with it. There are millions and millions of sites they are tracking and updating. Time resolves most issues. Google does provide an API that can be used, just Webflow does not have an integration so you would have to use that manually.

I’ve been waiting for 2-3 weeks now… hopefully, this can get resolved soon! I also did manually put on a request that’s why I am concern

why not simply 301 redirect those old pages to some new page, either with reference content or simply the home page?

I’ve been waiting for 2-3 weeks now… hopefully, this can get resolved soon! I also did manually put on a request that’s why I am concern

Was your request a removal request? Even so, it can take weeks for months.

why not simply 301 redirect those old pages to some new page, either with reference content or simply the home page?

Most of the pages look irrelevant, and you’d want the 404 so Google can do house cleaning. However for the /about page, that’s probably a good idea.

Point made. But traditionally the reason for 301 redirect on old pages in my opinion, is so if anyone else is linking to them or has bookmarked them they get a live page instead of a 404 which comes off as unprofessional at best. That said, a custom 404 page is usually better than the default version. But true, looking over the pages names looks like some of them were never meant to be indexed and ended up in the sitemap perhaps.