Basically the progress bar would be the color of the current section and would maintain the colors from the previous sections.

I may have time to think it through more tomorrow, but maybe making the scroll progress bar 5 individual divs that start the same colour, then as you get to the next section, div 1 retains it’s colour, but the other 4 change to match the new section. Then on the following section divs 1 and 2 retain their individual colours but the remaining 3 change to match the new…and so on…

I can see it in my brain, just need time to try it out on canvas!

In reverse, From section 5 to section 1

hopefully this makes sense and is possible.

Hopefully this is the kind of thing you are looking for?

Basically, i’ve added a 20% coloured div for each section inside a 100% wrapper with fixed position (top)

Then i’ve added a grey ‘cover’ div over this wrapper - fixed position - with a higher z-index than the wrapper.

Then added a ‘while page is scrolling’ interaction to the grey ‘cover’ div, so it goes from a 0% X axis point at the top of the page to 100% right on the X axis at the foot of the page.

Using this interaction, it is auto-reversed, so scroll back up and the divs are ‘covered’ once more back to the initial state.

Exactly what I was looking for. Was not sure how it would work reversing from 5 to 1 but it work perfectly.

Yep that was an added bonus when I tested it out - also, it works on tablet and mobile without any edits needed - bonus x2 !

Feel free to reverse engineer it, or I can add it to the showcase and make it cloneable if that helps you out

If you have time, if added to showcase and made cloneable I would appreciate greatly.

When I saw the clip on this, thinking what a neat idea. Having it color coded, the user will have an idea exactly where they are in a site.

I didn’t watch the video you mentioned initially, I wanted to test out my knowledge, but it looks like slightly different techniques were used, with the same scroll interaction to get to a similar end goal.

There’s often a few ways to achieve the same thing in web design, and Webflow itself - there may be a more efficient way than mine - but not bad for a quick weekend challenge!

Here you go Jon, hope you and others find it useful, clone away! 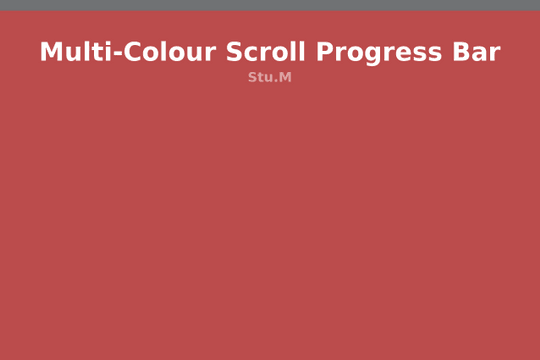 A quick progress bar solution for a forum member, with different colour divs to match the current sections, which are revealed as a grey 'cover' div moves right on scroll. https://discourse.webflow.com/t/scroll-progress-indicator/66808 Hope you also...

Did you change something? The bar work fine scrolling down, but if you are at the last section and scroll up the color appears to be red and not the color of the 5th section?

Hmm, it’s working fine for me both in the Designer preview and published link

Which browser are you viewing it on?

Are you able to take a screenshot/recording?

My apologies… ALL is good and thanks for all your help.

Fun idea. I could also see the scrollbar divs being links to each of those sections to quickly jump back up the page. Maybe with a hover effect to reveal the section title too.