Hey I’m new here. My “My Work” container is being overlapped by “Who am I” in mobile portrait mode and I’m not sure what the issue is. Any help would be appreciated. 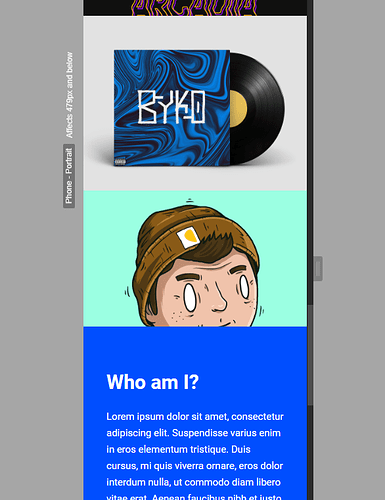 Did you figure it out? Im not seeing the same thing here.

Yeah I ended up switching from columns to a grid and it fixed it. Thanks for taking a look.

Oh ok. No problem. Do you know what the other problem was so you know how to avoid it next time?

I’m not sure, I tried changing just about everything and every time I scrolled down “Who am I?” Just went right up over the thumbnails. I switched to grid because while I was waiting for someone to reply I was playing with the site on my phone, and every third single column thumbnail was overlapping even though in the designer it looked fine. I was like screw it, let me just try grid and it worked. I was nervous at first because the thumbnails are smaller on mobile but I compared it to my Instagram feed and its basically the same size so its not an issue. It also solved the main overlapping issue so I just kept the workflow up.

Ahhh ok. I wish I could have helped you soon. I think bigger thumbnails is nice for portfolio stuff. With Grid you can make it into 2 columns or 1 as well.

I just played around with that and ended up going with the 2 columns just for a little more focus in that area, check it out I think it looks a lot better.

I dig it! Looks nice man! Much better!