Hello! I’m having an unusual problem. On my site, as you hover over menu items, the background changes (a simple show/hide interaction).

When you hover between B & C (JPG <-> PNG), the background changes within 5 milliseconds, if not faster:

When you hover between image A &B (SVG <-> JPG), the background doesn’t change for 200 milliseconds.

I would’ve assumed, if a background has already been loaded once, how can it be taking so long to draw again? The browser’s already rendered the SVG once…why is it re-computing it every hover event?

EDIT 3: Adding easing/transition time does not help. Because the SVG hasn’t even rendered, the transition (I tried 200ms and 500ms) don’t do much. The GPU is still drawing, so the background just pops out, instead of smoothly transitioning.

From my research, it turns out Webflow Interactions are wholly JavaScript-based, which seems to be a big no-no for animating larger SVGs. The recommendations are for CSS transitions, which are much lighter, but Webflow doesn’t make CSS transitions easy! Anyone know how to use CSS transitions to make a parent element be the trigger for a child element (it won’t work in the current layout since the text is arranged as list, which can’t nest anything anyways)…

Here is my site Read-Only: LINK
(Here is my live site)

FYI: Here is the waterfall for just the SVG asset loaded by itself directly. Each dot is a separate path. It is not a browser friendly asset. 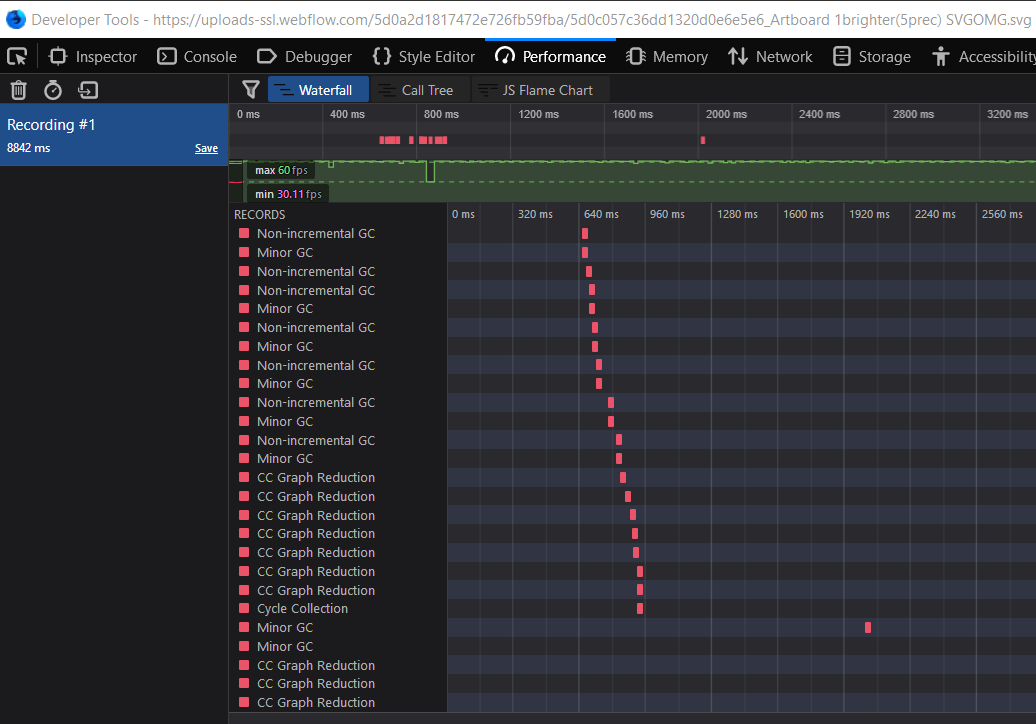 Yes, exactly! Since it’s not ideal, allowing its first render to be cached for all other hover events is just the thing I’m looking for.

Have you any ideas there? Why is the render being thrown away, even when it’s left at 1% opacity?

The bandwidth savings are substantial: SVG on this one single images allows for a nearly ~40% smaller total website size on mobile and ~10% smaller on desktop.

For what it’s worth, I reduced the SVG file size from 474 KB (51 KB gzipped) down to 391 KB (59 KB gzipped)–but, since the path count is almost identical, it’s not done much for rendering performance.

Have you any ideas there? Why is the render being thrown away, even when it’s left at 1% opacity?

You might want to post that over to the chromium browser team. They have bigger fish to fry right now. Sorry, but I just don’t have the time for debugging svg rendering issues across platforms and OS’s. Should be a good project for a CS student.

The bandwidth savings are substantial: SVG on this one single images allows for a nearly ~40% smaller total website size on mobile and ~10% smaller on desktop .

Chasing percentages can be a waste of time when the load is so small. You are under 1mb on desktop. Lighthouse is throwing a 100 performance score on desktop. As you slog more stuff at the browser it all does matter but Webflow hosting is blazing fast so there are practical considerations to take into account (dev time). You normally get a much bigger bang optimizing user experience via good UI.

Concerned? Test real rendering with png versus svg, throttled and not. Look the visual difference between. Then make a decision on what will be best for users. Good luck with your project.

No worries, mate. Thank you for giving it a go. I didn’t mean to put undue expectations on your grateful efforts!

There are many quicker alternatives we have (i.e., PNG for desktop w/ hover & SVG for mobile w/o hover), but I’m new to Webflow, so I wanted to make sure I’d not missed anything obvious (like CSS transitions).

About Chromium: I hadn’t realized, but the transition is lightning quick on Firefox, Edge classic, and IE even. Alas, we’re all under Google’s thumb sometimes.

Thank you. We appreciate the luck!

And, yes: the UI deserves more time, likely, than this!

Still, for others optimizing their SVGs, here are the top resources we’ve found (brings down an 800 KB SVG with thousands of paths down to about 391 KB!)

We discovered the problem after some SVG sleuths on Stackoverflow took a gander.

Adobe Illustrator was coloring the circles with SVG patterns instead of SVG fills—even though each circle was a single color! Replacing SVG <pattern> with SVG <fill> has given a 5x to 20x increase in rendering performance (depending on the CPU):

Does Google Chrome cache rendered SVGs? If not, how should we optimize SVGs for Chrome rendering?

That is good to know. Thanks for posting the update and sharing your resolution.