Hi all.
Does anyone know what the buttons ‘Add layout buttons’ and ‘Onboarding checklist and prompts’ stand for?
They under the ‘Settings’ button below the Assets button. Couldn’t find an answer to my question on the Webflow site.

That sounds related to either Memberships or ECommerce setup?
It would depend on what Webflow services your site is configured for.

Memberships would be my guess because of the Onboarding mention.

That sounds related to either Memberships or ECommerce setup?
It would depend on what Webflow services your site is configured for.

…nope. They are in the settings menu under the general tab. 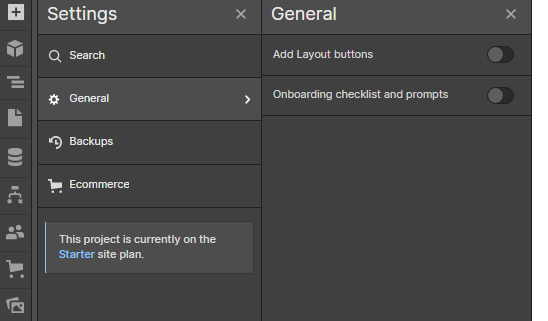 When I first noticed them a while ago they didn’t do anything, and googling them didn’t help.

The second button brings up a checklist along with tutorials. 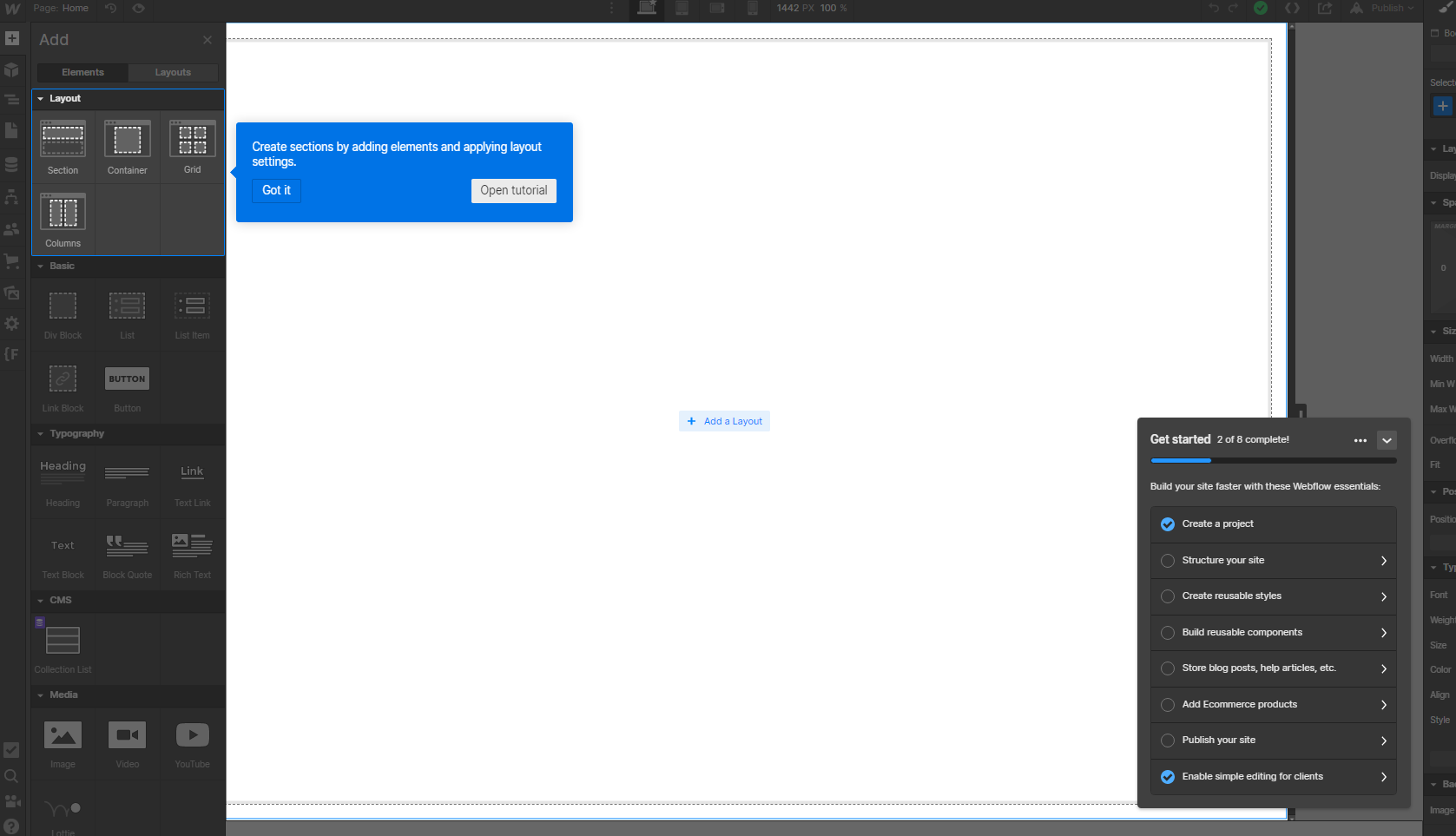 I think it’s a setting that makes it easier to use the prebuilt layouts.
I made a new account recently and it was automatically enabled. It puts a little add “+” button in your layout to quickly add sections.

Edit… just saw your reply.
I hadn’t heard anything about this beforehand either. Just showed up. I might have missed some announcement.

I think “add a layout” would be a game-changer if it allowed you to add your own components to the library.

But as it is at the moment, it doesn’t do much. In testing its only visible if there is absolutely nothing on the canvas, if you add anything at all then it just disappears? So not even in proper beta: it’s just kinda hanging out there

Yeah very interesting, it looks to me like an effort to integrate the getting started materials from Webflow U into the designer for new users.

But as it is at the moment, it doesn’t do much. In testing its only visible if there is absolutely nothing on the canvas, if you add anything at all then it just disappears? So not even in proper beta: it’s just kinda hanging out there

Okay…in FURTHER testing: when you hover over an element you’ve just added at either the top or the bottom of that element, a blue “plus” button appears that allows you to add more layout parts.

Again: would be useful if you were adding your own custom-made components. But having to rename everything into your own class system will slow most people down: not speed them up.

Final reply to this thread sorry

But over the last few weeks for a client project I dived back into WordPress for a bit. And I’ve been spoiled by Webflow

The Gutenberg Block editor really is half-baked, and the new full-site-editor (still in beta) is a step in the right direction: but still needs a LOT of work.

The problem is that they can’t let the legacy aspects of WordPress go. So you can only do so much with Gutenberg and the full-site-editor before you have to jump out of their to either use the legacy editor, install a plugin and find the right setting, or throw your hands up in the air and buy one of the many different site builders where none of them quite do the thing that I want it to do. (yes, I’ve decided to do a Webflow then conversion build instead)

The new layout button works exactly the way I had hoped the Gutenberg editor would have worked. It’s fast, intuitive, and apart from the fact that at the moment the only layout elements that are available are the standard Webflow ones, I kinda like it a lot. I’m hoping that custom libraries are on the roadmap because if they added them here, I would absolutely LOVE This.

Hey Mark.
Thank you for your prompt response. I have learned something new in Webflow again.

Sadly, the “Add Layout” button is (currently) disabled. It must have detected me playing with it and went back into hiding LOL. Which is a shame because I was just about to see how quickly I could build out a website using it.

But at least we know what it does now!