Hi everyone! It’s time to introduce you to our next featured Community member, Matthew Munger. @matthewpmunger is a graphic designer and videographer, turned web designer. He’s been using Webflow since 2015. 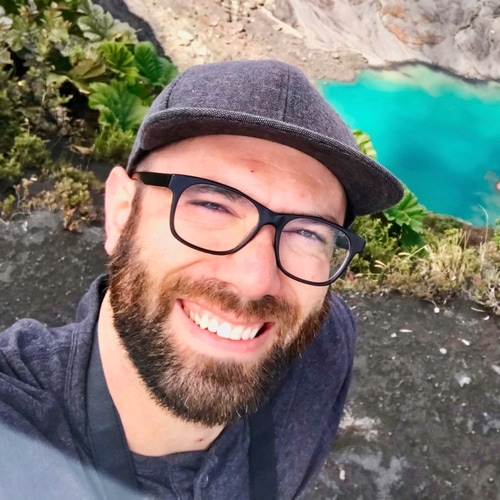 Matthew’s path into the design industry was both interesting and natural — both parents were sign painters that led to his mother pursuing graphic design. She is still a freelance graphic designer and Matthew works with her as an Art Director. One project they recently worked together on was some product packaging based off a coffee website he built in Webflow.

Around 1992 Matthew’s family got their first Mac, which allowed him the opportunity to experience computer graphic design and the amazing capabilities of applications. After high school with his AutoCAD degree, Matthew moved to the United Kingdom and did a civil engineering work and site surveys while attending a local college.

Matthew returned to the United States after a year in the UK to attend film school. After a year and a half his skills landed him a full-time position with a house of worship as a media artist. Matthew worked for the house of worship for 12 years doing filming, video editing, motion graphics, 3D animation, technical directing live concerts, and as well as writing and directing music videos, commercials, and documentaries. With his knowledge with AutoCAD and love of architecture, he also designed and managed construction of concert and theatrical stage design.

Matthew likes to learn new things and problem solve, which is one of many reasons why he decided to learn web design. He used Squarespace to build his first few sites, but soon noticed he was pushing the platform to its limits — which in turn limited his creativity.

He learned to code html/css to customize Squarespace, but after much frustration decided to found himself looking for a different platform — enter Webflow. When Matthew first started testing Webflow, he noticed he was able to start from a blank canvas rather than a template.

This delighted him. He immediately felt like he could be as creative as he wanted with almost no limitations. His excitement grew when he began play with the styles panel and noticed that Webflow would write the code for him, in real-time, while he focused on the design. At that time, living in Lesotho, Africa, the speed of the Webflow designer and convenient auto-save features allowed him to easily work with a low speed intermittent internet connection.

“It’s such a huge time saver.”

Since that first time playing with Webflow, Matthew now frequents our forum and enjoys helping others. He currently lives with his wife and two daughters in Costa Rica. We’re very to happy to have Matthew in our community as one of our newest community mods.

This is awesome! A fellow Okie! Love your story @matthewpmunger! Thanks for sharing @PixelGeek!

Hello @rileyrichter, yep OKC born and raised… and lived there for 30yrs of my life. Thunder up!

Nice! I was born on the east side of the state, but now I live in the metro. Thunder up!!!