I have a Timed Animation Interaction in my project called “List Items Move Left.” In it I have a list item called “layout209_list” that contains five list items, each called “conversion-problem_item”. Initially I want all the list items to be invisible (opacity = 0%) and be positioned 32 pixels to the right. Then, when the list scrolls into view, I want all the list items to reveal themselves (opacity = 100%) and move from right to left, one after another, to line up beneath the section’s “Your website isn’t converting…” heading.

The second action would set the position of all five items:

Next, I want to create an action for each item that reveals the item and positions it below the heading. I’d create the first action by clicking on the End point in the timeline and creating two actions for that element:

I would then also create the above two actions for the four remaining items so that each item would move to the left and reveal itself, one after another.

Here’s what I don’t understand. When I create these End actions for the five items and I click “Affect: Selected Element”, this modifies the first two initialization Actions I created so that instead of affecting all items in the conversion-problem_items class, it now affects just the selected element. In other words, changing the Affect from Class to Selected Element changes that setting for all the actions I’ve created. This means that I have to create two initialization actions for each of the five list items instead of for the class as a whole. Why does Webflow work this way? Why can’t I create initialization actions on a per-class basis and then create End actions for each list item in that class on an item-by-item basis? Is it always “either/or”?

P.S. In the section above the section I’ve discussed, I did create initialization actions on an element-by-element basis, but I would be less work if I could have used a class to affect them all. 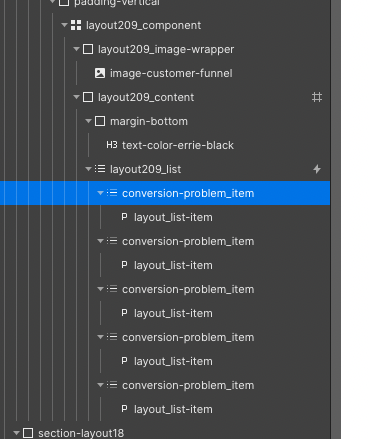 If you’re just looking to slide the items in, I would use the pre-made “Slide” animation. It will save a lot of time.

In regards to your class v. element question, the class setting is used to help implement animations across your entire website. In your case, I believe you’ll need to affect the element to achieve what you’re looking to do.

Thanks. I guess there’s no quicker way to do this than create interactions on each list item element.